As the year comes to an end, so does my biggest woodworking accomplishment to date. It’s been seven months in the making (well five if you don’t include the two months I was gone) but I can finally say that my bench is done!

At this point in time, I’ve decided not to use a finish on the bench. I’ve read many discussions and articles on the topic and to my own conclusion I’m leaving her al naturale. As you can see, I did decided to add the chisel holder on the side where I mis-measured. 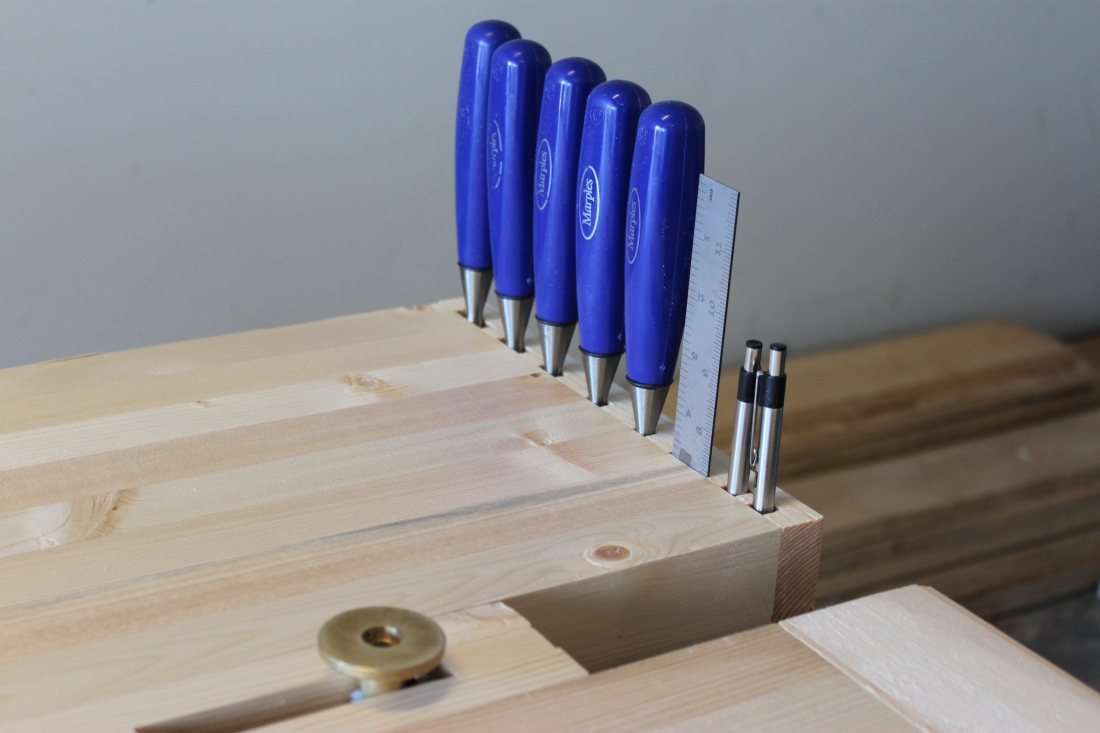 It almost seems like it was all intended. Making it was quite easy. There was the set up.

And then cutting the dados.

Yes, the magnet is a bit of an overkill for just a ruler but since I had it on hand I figured I might as well use it. I attached it with two wood screws and basically fixed my mistake.

The center piece worked out better than I hoped. 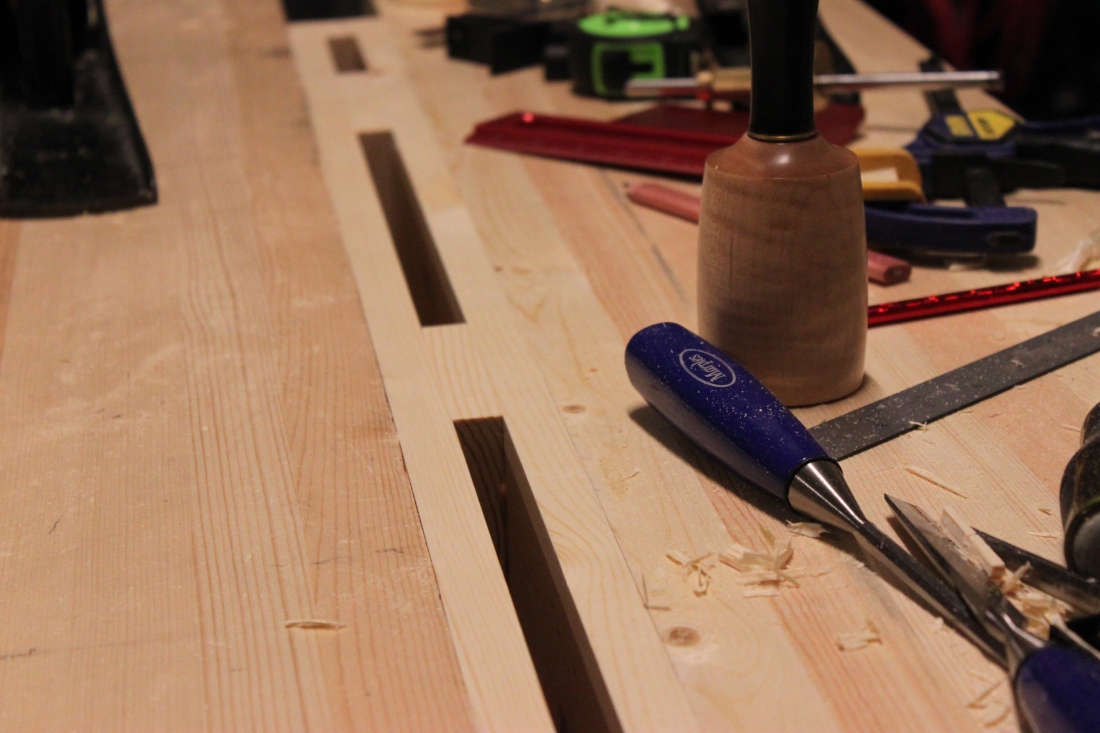 The space between the two tops was 2-3/8″ so just shy of using three laminated pieces of 3/4″ stock. I used S4S pine from the big box store to knock this out. Only the center pieces were milled to get a snug fit. In order to get the flush fit on top I needed to notch out the space where frame was.

Once these two projects were knocked out it was time to attach the top to the base. For this I took off the top and measured 6″ from the sides and centered on the base and drilled through with 3/8″ auger bit. I put back on the top, marked where the hole was on the bottom of the top, removed the top, drilled that hole in the top, and reattached the top. I would have liked to sink the lag screws into the frame but I didn’t plan ahead so there was not enough clearance to drill from the bottom. They are attached with 1/2″ x 3-1/2″ lag screws but I’m gonna extend those to 4-1/2″ at a later time.

With everything done, it was time to flatten it all. Overall it wasn’t too bad but my left side was sitting a little low. 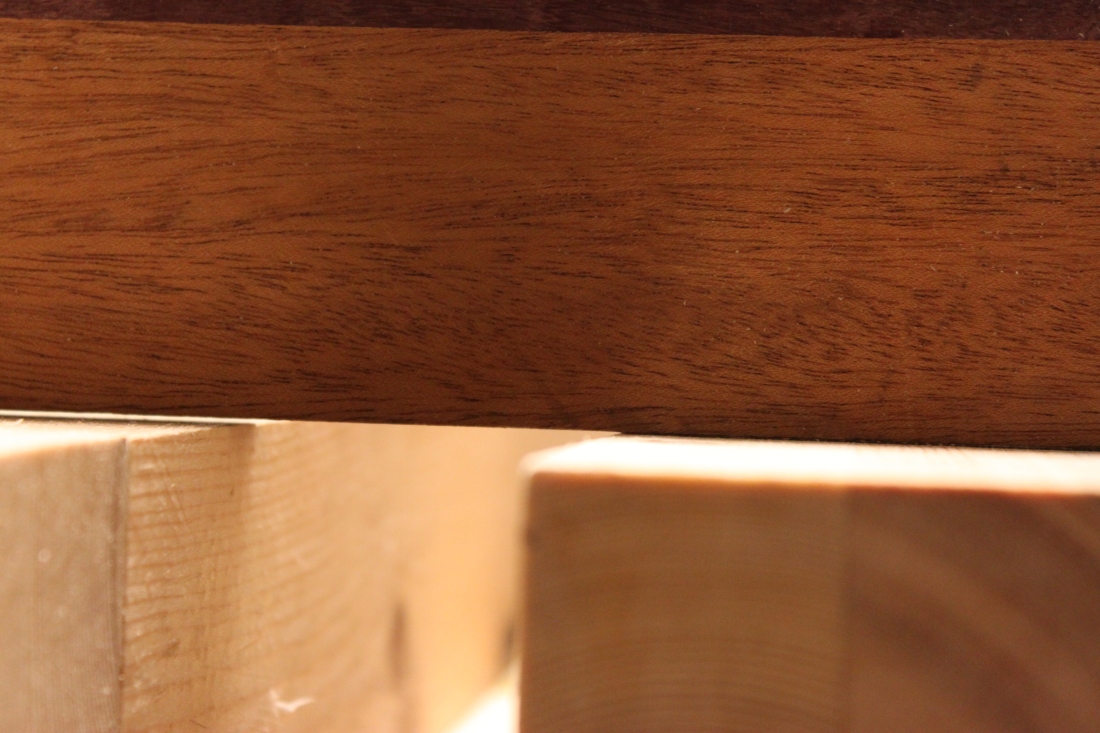 About 20 min worth of planing produced a flat top.

And here’s a shot with the center piece flipped.

It extends 3/8″ above the surface and works great. I actually used it to finish up the chisel holder. 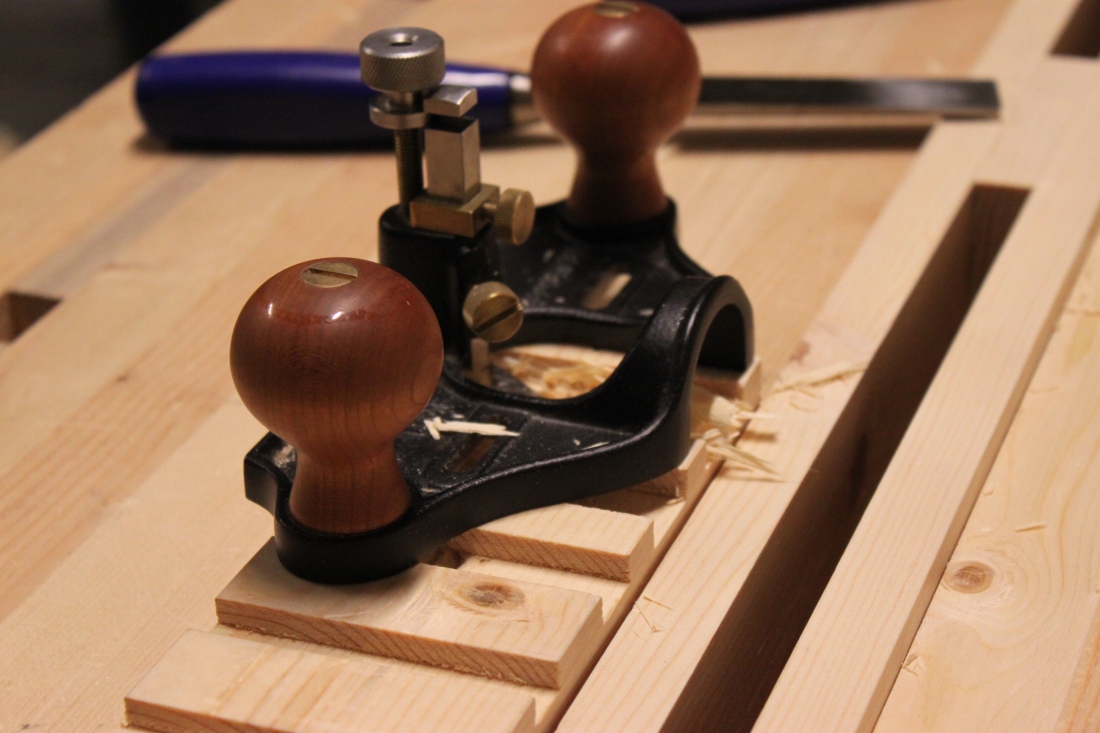 This bench was built entirely with hand tools. Not a single  power tool was used. Plans were modified by me from Fine Woodworking’s Hybrid Roubo Bench. Other than a couple of S4S pieces of pine, all the wood used is construction grade 2×6 from a big box store. Vise hardware for the wagon and leg vises are from Lie-Nielsen. I wish I would have documented actual build time but it took five months of weekend and after kids go to bed shop time. Thanks for looking.