I’m sure you’ve never noticed but I didn’t exactly have the best system for cut offs and shorts.

Well in all reality I don’t have a good system for any of my wood but we’ll talk about that another day. With the bench built, I’m starting to get the garage in a more productive state. That was pretty hard with a good amount of my wood in a two trash cans. It was impossible for me to know my own inventory and of course once I dumped everything out, there were pieces in there that I completely forgot I had. Out of sight, out of mind, right?

Since most of my projects are small, once I get milling, I never really have pieces longer than 48″. I looked for some ideas for cut off bins but I couldn’t find what I was looking for. I was also limited on materials. I had 8 pieces of 3/4″ plywood that measured 24″ x 35″ as well as one full sheet. I brought these with me from Pensacola and I have no idea why those were cut at those dimensions but I needed to use them up because they were just taking up space. So I began laying them out on in various ways on the floor and after about 30 min of doing so, I thought I had an idea. I came inside and put it into SketchUp and came up with this design. 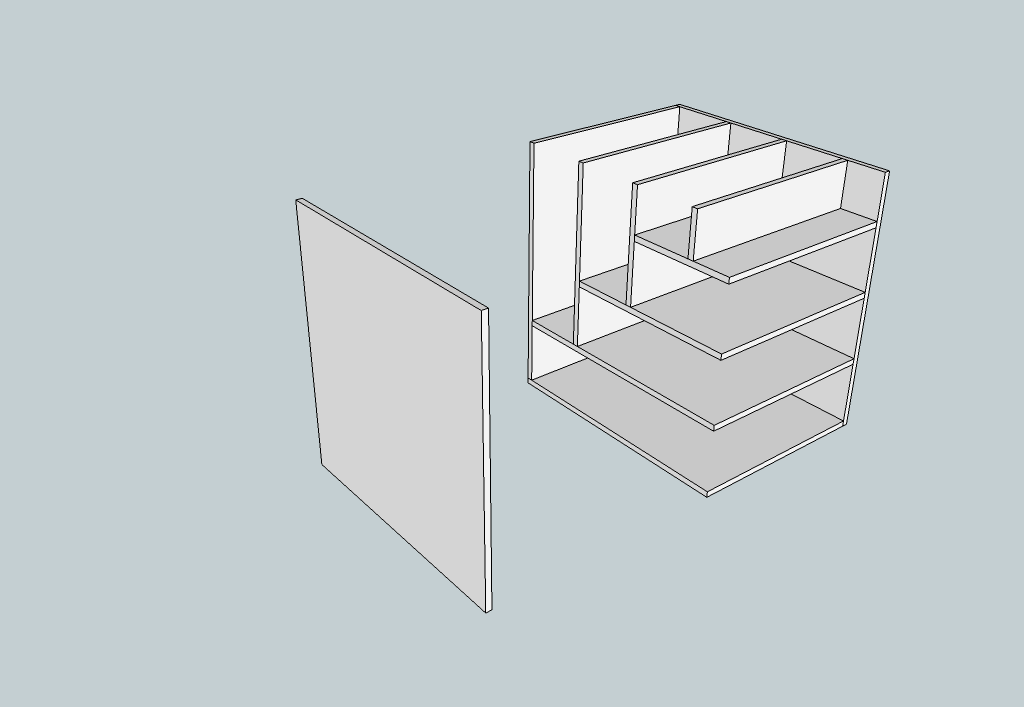 I wanted something for wide, rough cut boards I could lay down and also some vertical storage where my cut offs and misc pieces would go. The 24″ x 35″ pieces account for the guts and I used the full sheet for the sides. Each section is spaced 8″ apart and making it took about a total of 2-1/2 hours. Other than that spacing and the sides, I did not measure anything; nothing was even checked for square (and believe me, nothing is). The first thing I did was screw the back and bottom pieces so I had the basic shell and lay it on its side. Since the bottom two pieces are the same length, I measured up 8″ and made a mark. I placed the plywood on the mark and then got the vertical piece and placed it flush with the back.

I used that for my relative dimensioning, marked and cut my piece. That piece would then in turn be used for my next relative dimensioning. I marked 8″ from the back piece, put the board I just cut on that mark and then placed another along the bottom piece and marked it. That process was done until I had all my pieces.

What made everything a huge PITA is that nothing was screwed so my boards were constantly tipping over as I’m trying to get things marked and spaced. It would have been impossible to screw things as I went since my spacing was only 8″ and my drill was at least 10″. So once I had all my pieces, I marked 8″ on the opposite side of the board to get things a little even and started my screwing from smallest to largest pieces. With all my pieces as 35″ long, I knew the sides had to be 35″ x 35-3/4″ without actually measuring the overall size. Once it was time to get screwin, I realized I didn’t have enough wood screws… But then I remembered I kept a box of 100 pocket screws from a kreg jig I bought a while back. I only used it once and didn’t foresee myself using it again anytime soon so they volunteered to finish the job. 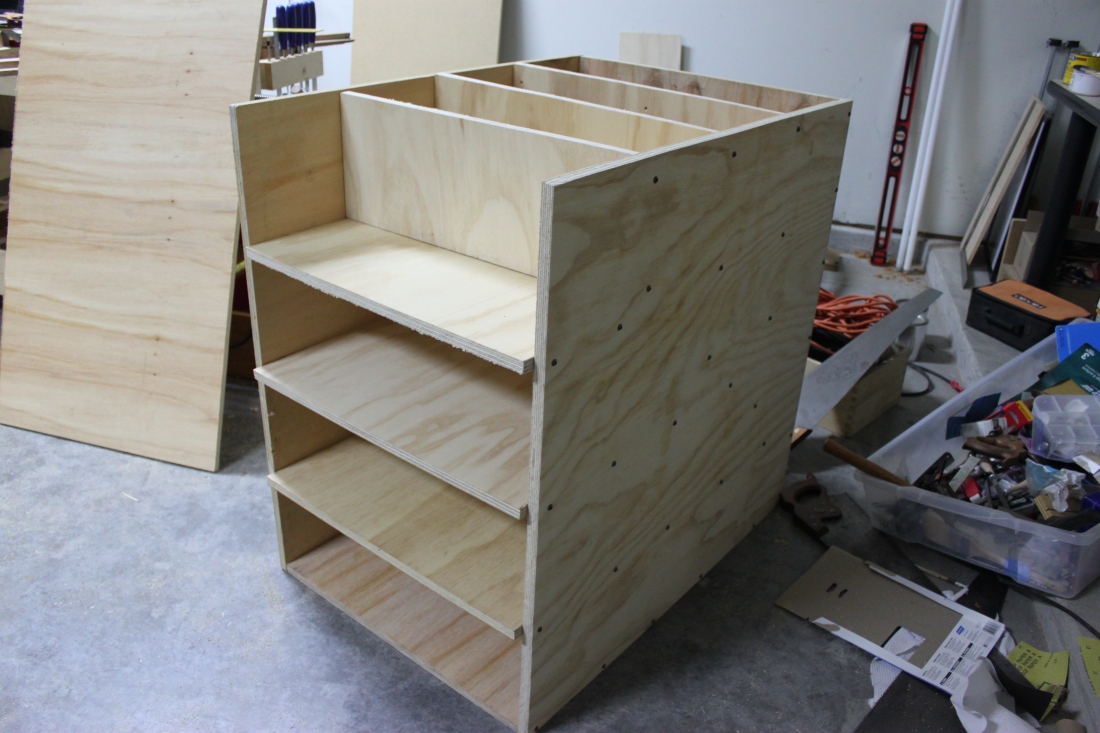 It may be ugly, but it gets the job done!!

This project was much needed. My cut offs finally have a home! Next is getting my full sized boards off the floor…