Since our move from Pensacola, FL to Jacksonville, NC back in March, I have not established a shop in the new house. We ended up leaving a lot of things back in FL because… well that’s a whole other story. My make shift bench that was nothing more than an unfinished miter saw stand was one of the things that I decided to leave behind. It had come to the point where it was no longer adequate for hand tool work so deciding to part with it was not a hard decision. In order to get back to woodworking I need a new bench. 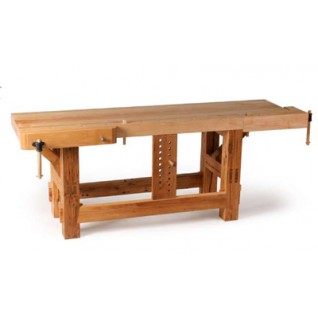 I had purchased plans from FineWoodworking.com a while back for a hybrid roubo bench that I knew I would some day build.Well that day has finally come. Right before I left Pensacola I sold off all my power tools so this bench will be a complete hand tool build (hopefully). Instead of going all fancy with wood selection, I’ll be going the cheap route. I’m sure I’ll be screwing up an awful lot so I’ll be going with pine for my first bench.

The plan calls for 117 bdft so to start off with I got 137.5 bdft worth of 2×6’s (25 boards). Now I know this will not be enough because of waste and what not but I’d rather need more than have extra right now. Every part of this bench will be laminated. The legs each are 5×5 pieces and take almost two full boards to make. That’s where this bench starts. Well, actually it starts on the ground because like the like I had mentioned, right now I have no bench to make my bench. 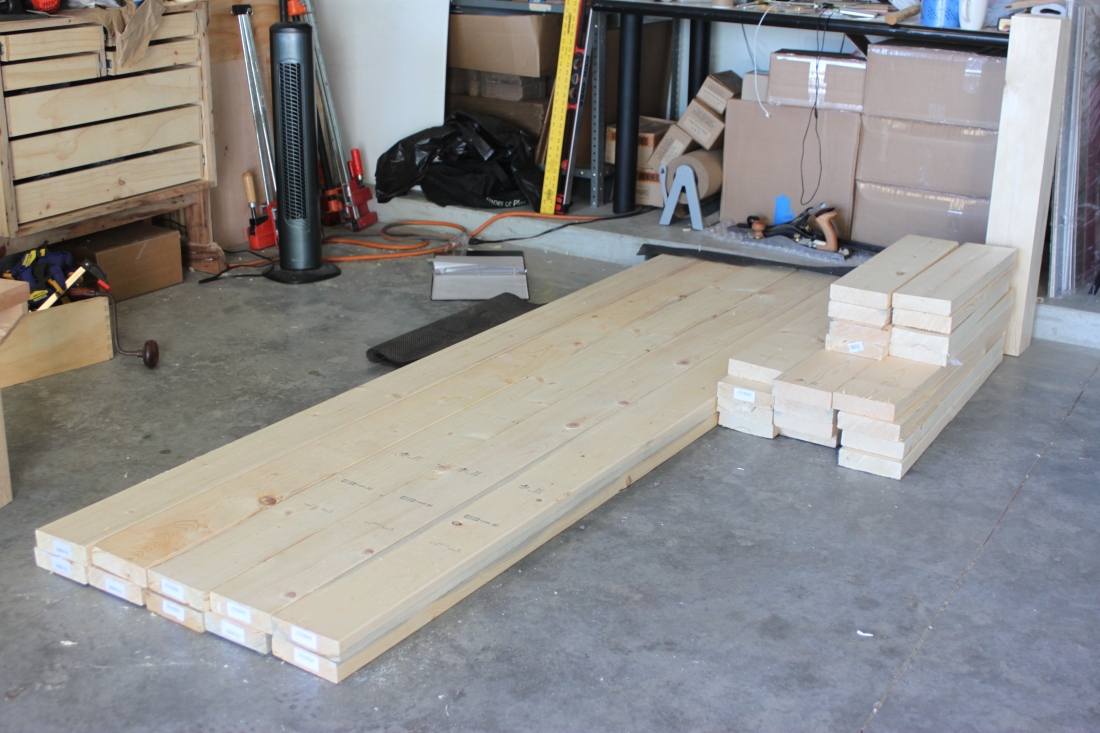 Luckily I have this raised concrete section of my garage that I’ve placed ten 2×6’s, five across double stacked right up against. This acts as my planing stop and elevates my work. It’s rough on the knees (no jokes) but I bunch up some drawer non-slip padding and it helps.

Each leg takes four pieces of 2×6. After crosscutting the pieces, I flattened each face, thicknessed to a little over 1-1/4″ and jointed an edge. Jointing with this set up is actually quite easy. I just move the boards, create a space for a piece to stand on edge and the push them back together. 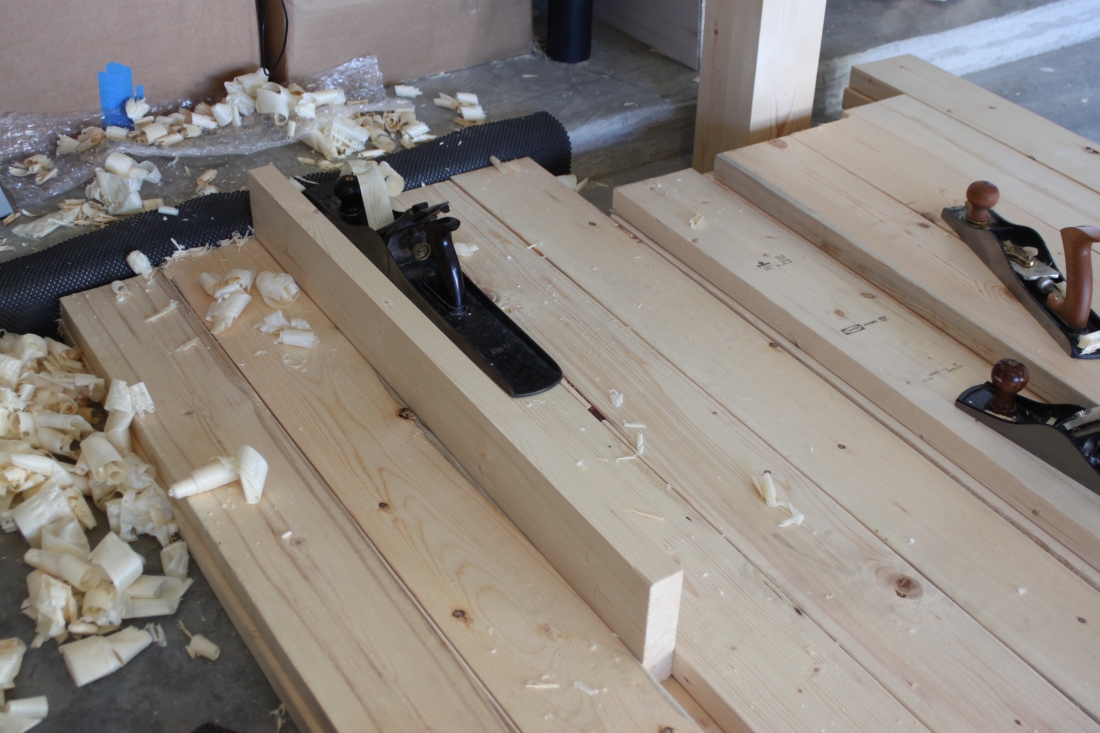 After two faces and an edge are planed, I ripped the board down to about 5-1/8″. Once I have four pieces ready to go, it’s just a matter of clamping them up. When I laminated them, I was just focusing on getting each jointed edge as flush as possible. 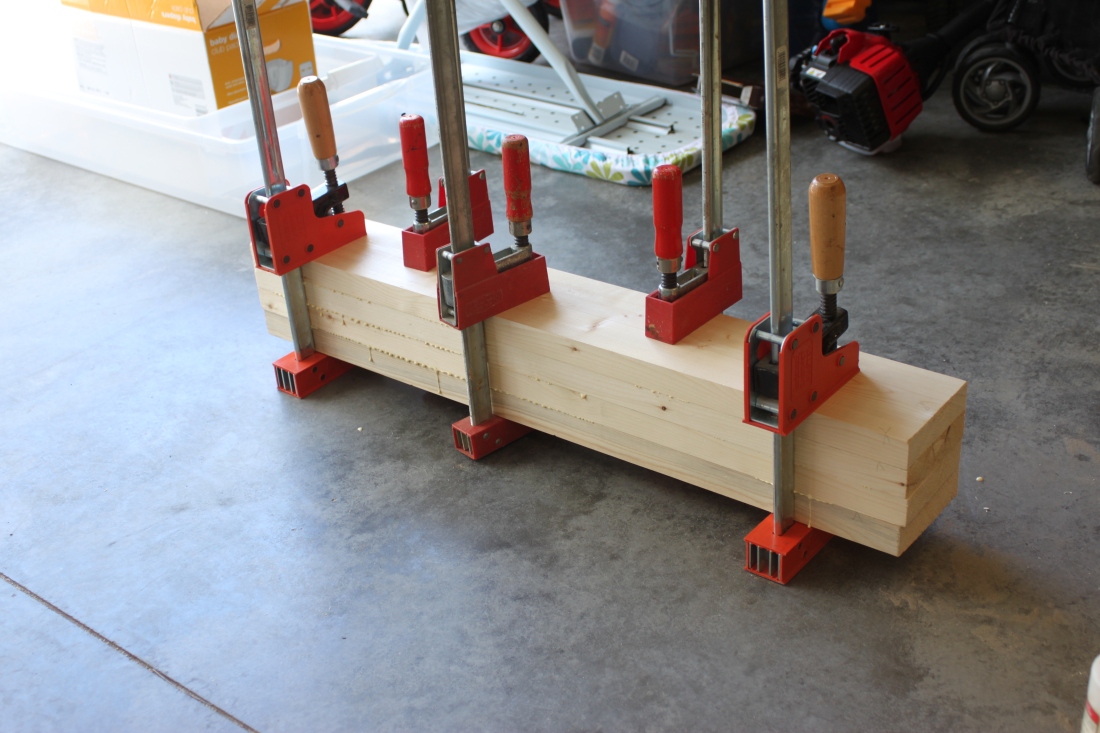 The opposite edge is no where near flush but since I over cut it by roughly 1/8″ plus it was going to be my last side planing I wasn’t worried about it. 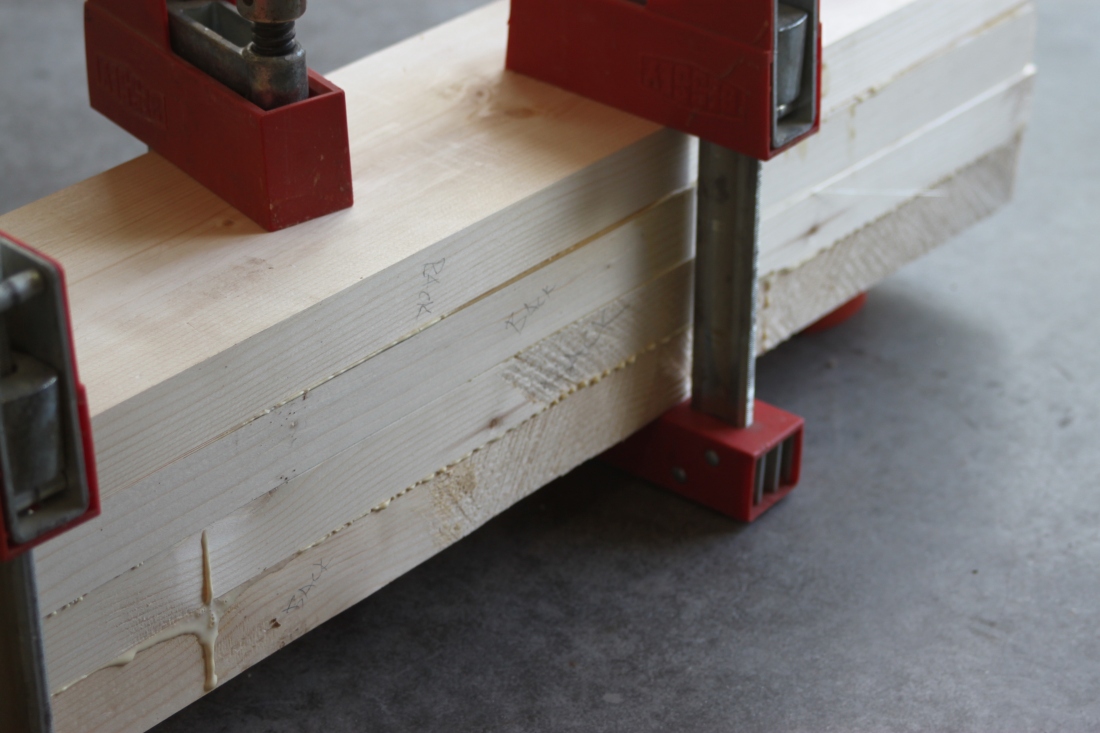 After the leg set for a few hours, I took it out of the clamps and cleaned up and re-flattened the edge and re-jointed an adjoining face. Now it was just a matter of squaring everything up to the final dimensions of 5×5. Even though it’s pine, taking the thickness down with the my “scrub plane “was a complete pain. I mean come on, I’m doing this stuff on the ground. Finally, after some tweaking, I have my 5 x 5 leg. 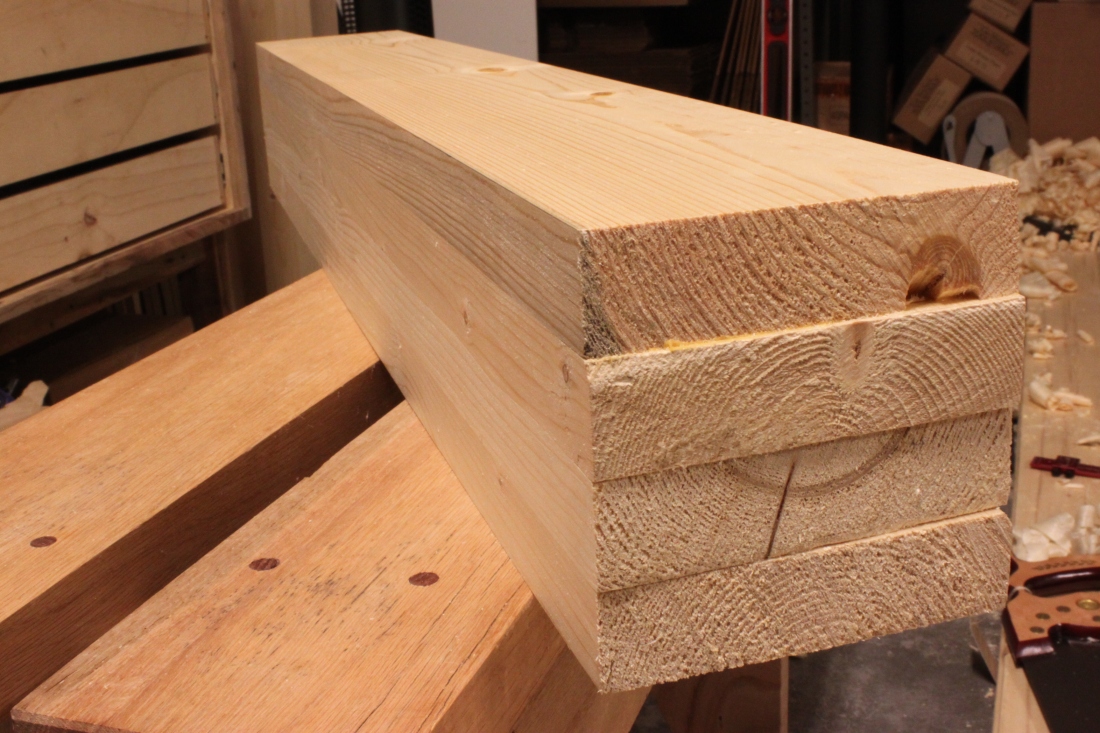